“Shaky cam” can be one of two things: an intentional stylistic choice that places the viewer in the middle of the action, or a distraction that pulls them out of it.

So, unless you’re shooting a fast-paced spy thriller or a handheld DIY reboot of The Office, you’ve got to take steps to avoid jittery, wobbly, unsteady shots. Sure, you can use something like warp stabilizer software to take the shake out, but that often comes at the cost of your framing.

Instead of depending on frantic, costly post-production fixes, we humbly suggest a better option: use a gimbal and get the smooth shot you need while you’re actually shooting it.

Gimbals are getting more compact and affordable every day, making it easier than ever for filmmakers and videographers to channel their inner-Kubrick and capture gorgeous, fluid tracking shots. So, which gimbal is the right one for your production?

The Connect2 team is here to help you figure it out with this definitive guide to DSLR gimbals, plus we’ve added some great examples of smartphone stabilizers too for those wanting to get the most out of the camera in their pocket. Take a look, make some notes, and then hit up your university’s equipment lending program to get your hands on a gimbal that can make your next shot your smoothest one yet.

The Ins and Outs (and Ups and Downs) of Gimbal Axes

A gimbal is defined by Merriam-Webster as “a device that permits a body to incline freely in any direction or suspends it so that it will remain level when its support is tipped.” Simply put, once you’ve attached an object to a gimbal, that gimbal will always keep your object level, no matter how you move it.

The three axes are tilt (pitch), pan (yaw), and roll. Here’s what that means:

While the above highlights ways a gimbal can help you artistically, the device becomes a go-to production must-have when used practically for camera stabilization that overcomes unwanted operator movements.

The most common gimbal is the handheld stabilizer. These compact battery-powered gimbals are affordable and incredibly effective for eliminating shake from your shots. Using smaller cameras with these systems is highly recommended. They’ll be easier to mount, easier to balance, and less physically demanding on you as an operator.

You should also use a camera with a reliable true auto-focus system since your own focus will be on the gimbal itself and framing your shots. Take for example the Blackmagic Pocket Cinema Camera 4/6k. It certainly produces a stellar image, but it also happens to be one of the most difficult cameras on the market to pair with a handheld gimbal due to its wide shape and lack of an auto-focus system. (Don’t fret — we’ve included a reference chart that will help steer you toward the best gimbal/camera combos.)

Another option is the steadicam, which uses a counter-weight system for stabilization and a vest that’s strapped to the operator’s body. Usually reserved for larger camera rigs, these systems can be expensive, cumbersome, and time-consuming to set up. In exchange, they add some serious functionality, like the ability to spin the entire arm 360 degrees and distribute the device’s weight through your body’s core. 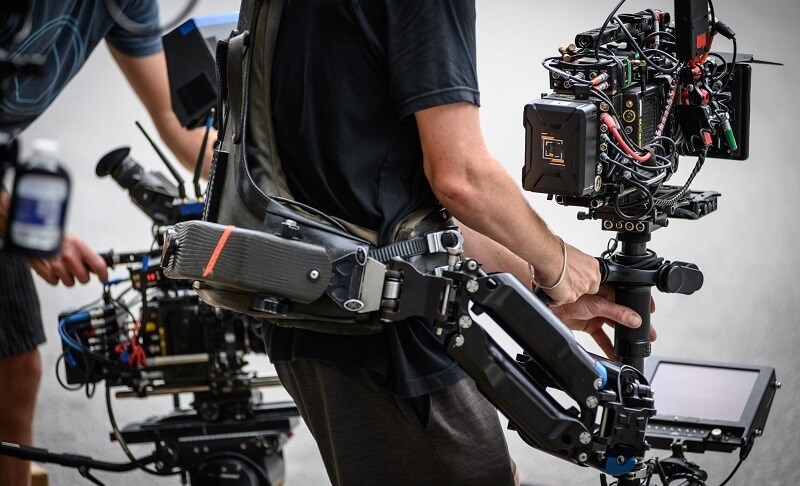 Pro Tip: Payload limits exist for a reason. Exceeding them will, at best, possibly ruin your shot, and, at worst, possibly lead to broken gear. Always know the weight of your camera, your lens, and any accessories you’re adding to your rig before you attach it to a gimbal. Additionally and importantly, always be sure to lower the stabilizer’s weight settings if you move to a smaller camera or remove accessories. Neglecting to do so can cause the device to vibrate intensely and/or malfunction.

The largest and most competitive market for gimbals in the world today is aiming to attract DSLR owners. We broke down some of the best DSLR gimbals out there, starting off with a classic that has pretty much become a household name by now...

Even though it was released in 2018, the Ronin S remains one of the most popular (and budget-friendly) stabilizers on the market. This gimbal effectively changed the game. It forced similarly priced competitors to raise their standards, thanks to best-in-class functionality, a well-designed app, solid battery life, and a robust buildout that doesn’t feel like cheap plastic.

This isn’t to suggest that the Ronin S is free of drawbacks. It can get quite heavy when dealing with long days (and even long takes). If the weight is an issue, you might want to check out the DJI Ronin-SC, which is a more compact version.

Another drawback — the Ronin S battery is built into the handle, and that handle must be removed in order to charge the battery. If you anticipate any quick power supply swaps, a backup handle will need to be purchased.

You can tell that great thought went into the buildout of this gimbal. I absolutely love the multiple handle options that allow for more freedom and creativity when capturing shots. The Crane 3S can be deployed in the traditional out-in-front position or in “briefcase” mode, which allows the operator to run and capture action lower to the ground.

The Crane 3S also boasts one of the highest payload limits found in this guide; it can support camera/lens combos of up to 14.3 lb. Finally, with inserted batteries, the 3S can run for up to twelve hours. With the PowerPlus battery pack system, that number jumps up to eighteen.

Gudsen’s Moza Air 2 is keeping big players like DJI and Zhiyun on their toes. With a 9.25 lb payload capacity and a sixteen-hour battery life, this is a truly top-notch gimbal system at an amazingly affordable price.

Worth noting: Gudsen recently released a new version of this gimbal, the Moza Air 2S. It adds four hours of battery life and features a “micro hand wheel” that allows you to manually tilt or pan the gimbal for minimal moves. It’s also $120 more, so you might consider waiting for the inevitable price drop.

The high-quality 4k camera in your pocket or bag has become a major player for mobile journalists and content creators alike. Here are a few stabilizer options specifically manufactured to work with your smartphone.

By now you have seen the DJI name more than a few times throughout this guide; at this point, the company is basically stabilizer royalty. I’ve used this specific stabilizer with an iPhone for a major market news channel and as a substitute for a RED DSMC2 on a documentary shoot that required filming from a canoe.

The OM 4 features a sleek foldable design, a magnetic attachment for super-quick set up, and a long-lasting, fast-charging battery. If you don’t have access to the OM 4, honestly, any of the DJI mobile phone stabilizers will serve you well. Chances are high that your University’s lending program will carry an OM or Osmo stabilizer that you will be able to check out for your next project. (Regarding that doc shoot, I made the right choice. The DJI/iPhone rig ended up at the bottom of a river. For the record, I wasn’t the operator!)

Zhiyun is emerging as a strong player in the gimbal space thanks to exceptional smartphone stabilizers like the Smooth 4. Priced at two-thirds the cost of the Om 4, the Smooth 4 is wildly affordable, and it pairs seamlessly with the ZY Play app for increased functionality.

Pro Tip: Your smartphone can be a valuable production tool, even if you don’t want to use it as the primary camera on a shoot. Put it to work as a mobile monitor by connecting it to your rig via Bluetooth or wired connection.

The following gimbals are much larger than any of those mentioned above; packing them up is sometimes easier said than done, so keep that in mind if traveling light is a concern. However, if you’ve got the space, a two-handed gimbal is worth considering if only for its higher payload limit.

This stabilizer is actually discontinued, as DJI is trying to steer people toward the Ronin 2 (see below), which happens to cost a whopping $6000 more. Nonetheless, the Ronin-M remains a popular device, and many universities include it in their lending programs.

The Ronin-M’s two-handle support system makes it famously easy on the operator, and it’s stable enough to use on a moving vehicle. One word of advice, though: Take your time when balancing your camera on this gimbal. It can be quite finicky if not done correctly.

At over $8000, this gimbal is expensive — and for good reason. It can operate in G-force winds, and, with a 30 lb payload capacity, it can handle even the heftiest camera loadout. Its carbon fiber body keeps its weight down, and you can use it in conjunction with a multitude of other setups, like car mounts or jibs. Simply put, the Ronin 2 is the professional option.

Sure, it’s definitely overkill for a DSLR, but it deserves a place on this list for being one of the best gimbal systems on the market.

Whether you’re shooting with a DSLR, phone, or a true cinema camera, the Connect2 team hopes you found this stabilizer guide helpful and that your next production goes smoothly.

Remember to reach out to your university’s lending program for your gimbal and other gear needs. It’s a fantastically valuable resource that can help you raise your next project’s production value to new heights.

About Lorensbergs and Connect2: Equipment checkout software Connect2 from Lorensbergs supports equipment lending programs in colleges and universities worldwide. Over 100 institutions use Connect2 to showcase, schedule and track their resources. It enables students to browse, select and borrow the kit available to them - including cameras, gimbals and the many other items needed for each project. It adds up to better creative output for students, and higher ROI for the institution. Find out more about Connect2 here.