Video production is a journey. This is true not only for projects as they move from ideation to post, but also for you as a videographer, journalist, filmmaker or content creator.

This journey is marked by many milestones. Some appear in the form of time-saving breakthroughs when you light a scene, operate a camera, or hold a boom. They pop up every time you learn a bit of practical knowledge from a peer, professor, or blog writer. They can happen on set, in the theater, or on the couch when a scene you’re watching inspires you.

These milestones—the knowledge obtained—make us better at our craft and ensure that our next production will be our best one yet. This article shares five such milestones — discoveries, bits of info, things to consider — that most of us encounter sooner or later. Each is included due to its game-changing power to elevate projects.

We’ve also included some video gear recommendations you might find useful. (If you’re studying, remember to check your university’s equipment lending program for gear before purchasing anything for your kit!)

Knowing your kelvin temperatures and how to match light sources is one of the fundamentals of lighting. (If you need a quick refresher on this topic, just bookmark and revisit the chart above!)

Bi-color LEDs are ever evolving, quickly laying waste to older incandescent light fixtures which you can now buy in bulk on eBay. If you’re going to purchase or rent a nice set of lights, be sure they have some range on the kelvin scale and a high CRI/TLCI — many people think that 3200K (tungsten) or 5600K (daylight) will be enough, but it might actually be too limited for your desired look.

Kelvin scale knowledge isn’t just important for how it relates to the color of light sources. It’s also crucial for white balance, or how the color white is being interpreted by your camera. If it’s showing as true white — dead center on a circular vectorscope — then you know all of the other colors are also true within your image.

Granted, there are exceptions, but I recommend filming in raw with no video processing or white balance baked into the footage. This will allow for more color grading options in post.

Additionally, always pack a grey card — like this affordable option from Vello — in your kit and grab a reference shot of it at the beginning or end of each shot (or, at the very least, at each setup).

Showering sets in harsh light is a mistake made by many AV newbies. Everyone knows they need lighting — but they might not know that it needs to be controlled. For lighting to work best, it must be accented, modified, reduced, softened, and sometimes even eliminated. For that, you need a basic flag kit (and you need to take it to each and every shoot ever). What’s in the kit?

Silk: Used to soften light sources. The larger the silk, the softer the light source will become by dispersing the light over a larger surface area.

Net: Made to knock down the intensity of a light source. A green edged net (or “single”) will drop the light by one stop. A red net (or “double”) will reduce it by two stops.

I also recommend adding a bounce or reflector to your kit. You might even consider adding a cucoloris (cookie) to modify your light source into various shapes — a great technique for creating eye-catching interview backgrounds.

3. Take to the Skies

One does not simply learn how to operate a drone overnight, but if you can get in enough practice and learn the rules, aerial shots are a fantastic way to take your production to new heights. Let’s take a quick look at some of the ins and outs for operating a drone.

In the US, if your drone weighs more than 250 grams, you will need to register with the FAA for $5 (which you won’t have to do again for three years). To bypass the 250g legal legislation, DJI did create the Mini 2 which comes in at 249g, which is a professional option that does not need to be registered. Worth noting: There’sa different, more rigorous registration process for anyone making money as a drone pilot, versus someone flying simply for fun.

The other basic rules include not operating a drone while under the influence, not flying near other aircraft/airports, keeping the drone lower than 400 ft, not flying over large crowds, and not flying within restricted airspaces like national parks or Washington D.C.

Of course, these rules vary by region, and it’s impossible to know the specific bylaws of each and every country. Which is where the team from Dronemade comes in with their incredible website that features an interactive map where you can simply click on the country and they will redirect you to the specific drone operation rules for that specific nation. 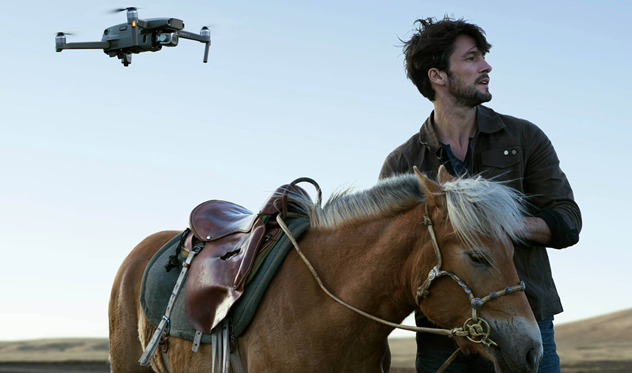 The Mavic Pro 2 via DJI is an excellent option for a drone.

With the red tape out of the way, let’s talk about the best uses for a drone on your production.

Establishing Shots: A drone is perfect for setting the location and delivering a wealth of knowledge to your viewer about where exactly the following scene is taking place. You could also use the drone to introduce a character within the establishing shot, like a bird’s-eye view of your talent walking through a forest.

Hot tip: Advancements have been made to make drones quieter — but that doesn’t mean drones are quiet. Plan to ADR/foley any sound you might need from your drone scenes, because the on-set audio will likely be ruined.

No Solid Ground: What does this mean?Basically any shot where you can’t plant a tripod. Have a subject climbing a mountain face? Someone standing on the edge of a canyon admiring the view? Boats in choppy water? You’re covered with drone footage. Just be careful: I’ve seen a poorly controlled drone draw blood, and we had to bust out the first-aid kit. Which brings me to my next point...

4. Know Your Look, Curate Your Gear

I’ve talked before about some great zoom lenses that can offer versatility when filming, especially for journalists on the go, but that might not be the best thing for your production. If you are making a film, look into renting a nice set of cine prime lenses for your nown to normally boast some extremely fast apertures, cine prime can quickly elevate the look of your production and provide some great range as far as depth of field is concerned.

Visualize your shots ahead of time by drafting some storyboards

If you are going to rent high-priced lenses, do it before your production starts so you can familiarize yourself with the glass. Take some reference footage to review before you hit set.

Personally, if I could only take three prime lenses, I would run with an 18mm, a 35mm, and either a 50mm or 85mm lens, depending on the project. Some people, especially newer filmmakers, prefer a 28mm to the 35mm because it’s closer to the standard focal length found on phones, which is the camera everyone interacts with on an almost daily basis.

The cost of primes can be extremely prohibitive depending on the brand, which is why borrowing lenses from your university’s lending program might be the best recommendation in this article. Still, Rokinon has some surprisingly affordable prime options. Of course, if money is no object, well, it’s hard to go wrong with a set of Zeiss primes.

5. Take Care of the Crew

It’s very rare that you’re the only person involved with your project, because video production almost always requires a team of some kind.

Things to remember: Stick to your shooting schedule. Provide meals or snacks that meet dietary needs. Scout your location so you know where the restrooms are located and the crew knows where to park. Schedule breaks. Pay your people what was agreed upon and do it on time. If they are unpaid (which can happen, especially with student productions) return the favor by offering your skills on their next project.

You also have to consider the safety of everyone involved. Always have an onsite first aid kit. Never ask anyone to do something you would not do yourself. Be mindful of call times and turnarounds to ensure nobody is driving to and from set while exhausted. Always know exactly where you are so you can best direct ambulances should the need arise. Keeping your crew happy can yield incredible results as they will be far more efficient, effective, and productive on set.

Finally, if weapons are involved in any way, stick rigidly to local laws and industry best practices like lives depend on it — because of course they do.

Now, let’s recap: Fully understand your kelvin range so you can blend artificial and natural lighting. Shape your lighting with flags to create dynamic scenes. Add drone footage to heighten production value and nail establishing shots. If you can get cine prime lenses, make it happen. Take good care of your crew. Even if you can do just one of these things, your production is better for it.

Don’t forget — always borrow from your university’s lending program before buying. On behalf of the entire Connect2 team, we can’t wait to see what you produce next. We hope it’s a hit!