People love Blackmagic Design. I know I do. This pocket cinema camera manufacturer has been a force of innovation and disruption since 2001, thanks to its dedication to releasing superior products at shockingly reasonable prices. With its supportive public personality, its following has developed into an impressive fandom.

Let’s take a look at a few Blackmagic Design products that could prove helpful on your next cinematic shoot or live production. Be sure to check out your university’s equipment lending program for some of these user-friendly products. We bet you find a few, given Blackmagic’s popularity.

Currently, the 6K Pro is the flagship model of the Pocket Cinema Camera line, and it’s a smart investment for anyone seeking high performance at an obtainable price ($2499 retail).

It has the popular Super 35 sensor, a lens-friendly EF mount, a bright, tiltable touch screen, and built-in ND filters that let you quickly knock down your image a few stops without attaching external filters.

According to Blackmagic Design’s website, the 6K Pro is how you “Get the ‘Hollywood Look’ with Digital Film,” and, really, the claim checks out. The camera produces wonderful images with 13 stops of dynamic range, 6K resolution, high-end color science, and a BRAW (Blackmagic Raw) format that, when colored with DaVinci Resolve, can lead to some truly impressive visuals.

Blackmagic cranks out hardware updates with surprising frequency, so if you don’t want to commit to a purchase right now, it’s likely you’ll have no problem finding one of these popular cameras through your university’s equipment lending program.

FYI, Blackmagic’s newest camera release, the BMPCC 6K G2, is essentially the same camera—but it’s $500 cheaper, thanks to a lack of built-in ND filters. There’s also the BMPCC 4K. It trades the EF mount for a Micro Four Thirds, so it’s more affordable and still a great camera if you’re fine with 4K versus 6K. If you have your eyes set on the 4k model, check out this article that takes a deeper dive into this pocket cinema camera.

These cameras have all had production software updates that allow them to carry tally, and each can be used in a multi-cam situation via the BMD Software Control app. Of course, if you’re looking for a Blackmagic camera designed specifically for studio use... 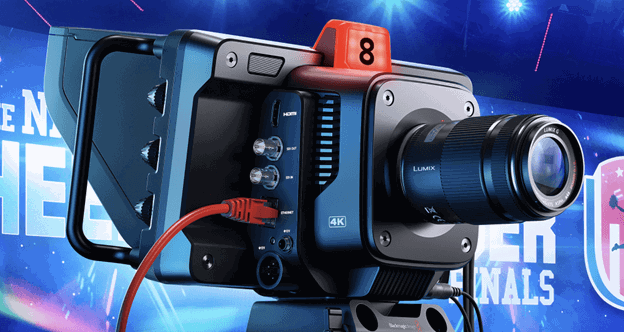 If you’re shooting a conference, concert, news broadcast, or sporting event, then this is the Blackmagic machine for you. It’s got quite a bit of functionality built right in:

I’ve used these as a three-camera interview package for a large news station when the main switch truck (carrying $1M in gear) was unavailable, and the audience was none the wiser.

I’m not a fan of HDMI cables—they’re too expensive to have such a high failure rate. Fortunately, while this camera does have HDMI ports, it also features SDI, which is a far superior professional production cable. Additionally, you can use the 10G Ethernet SMPTE fiber alternative, which is what I recommend.

With one cable, you can send camera video, receive a program return, flash tallys, communicate with talkback, control the image remotely, and even power the camera (if you have a Blackmagic Studio Converter). Three-camera shoot? Run three cables, and get to testing.

If you truly want broadcast quality, there’s the impressive new Blackmagic URSA Broadcast G2, which works with top-of-the-line broadcast lenses. It also features built-in ND filters, dual media slots for non-stop recording, robust audio options, fiber converter compatibility, and professional v-mount battery capabilities that allow you to run handheld out in the field for hours. Be sure to pair one of these with a stable tripod; with multiple accessories and a studio lens, these setups can get heavy in a heartbeat.

This effective multi-use switcher changed the game—it’s essentially an entire rack of gear compressed into a sleek piece of hardware that fits into your backpack.

Sure, there are some negatives, like the tiny buttons that are incredibly easy to mispunch on the fly, but all can be forgiven when you consider the positives. It has eight inputs, four chroma keyers, six independent DVEs and two media players. It has a quick button punch for a stored still image (like a main show slide). It has two downstream keyers, 16-way multiview, and two USB connections. Plus, it can simultaneously record all eight inputs on top of a program switch and livestream directly out of the switcher. Nice.

(Speaking of streaming, if you need any insight into how to navigate that wild world, the Connect2 team has you covered with a few tips and tricks for better streaming.)

The recordings from this ISO model will interface directly with DaVinci Resolve as a saved project file. You can open all of the simultaneous recordings, and everything will be in sync and all of your transitions will be stored.

Blackmagic just  announced a brand new SDI version of the ATEM switchers, which has been something I’ve been asking for since the first model was released. This is a substantial upgrade for the product line when it comes to being used in professional settings. Longer runs, increased reliability, and fewer points of failure in the signal line when it comes to connecting the switcher to your cameras. Big win for BMD!

There is one slightly annoying thing about this switcher that I’d like to call out: If you’re running ISO records, the ATEM records all of the inputs—including the inputs you’re not using. So, even if you’re only running three cameras, you’ll still end up with five black recordings every time.

I’ve been using Adobe Premiere for almost two decades. It’s easy and comfortable. It’s almost nostalgic. Of course, it also feels like I’m stuck in an unhealthy relationship with someone who continuously lets me down. Perhaps it’s time I join the endless stream of editors jumping ship to DaVinci Resolve.

Recently I was on a show site where something needed to be edited immediately. I was handed a laptop, and the only NLE on the machine was Resolve. At first, yes, I was lost. Nonetheless, within only minutes I was able to do what I needed to do—and I could immediately tell that Resolve was vastly superior to the bulky editing software I’ve known my whole life.

Resolve has long been famous for its color grading tools, but it’s steadily gaining popularity as an all-around post-production powerhouse. Sure, people have their preferences, and many will stick with Premiere just for its ability to communicate seamlessly with other Adobe apps. Regardless, I now know plenty of pros that have already happily made the switch.

The highly capable free version of DaVinci Resolve is available to everyone. The super-charged version, DaVinci Resolve Studio, goes for $295 (and is often included at no charge with the purchase of other Blackmagic products).

The Micro Converter is extremely helpful to have on hand, especially if you are using the ATEM switchers that rely on HDMI (a cable that can really only push a signal for about 50 ft. without a distribution amplifier in line).

For long runs like from a camera position or lectern to your tech table, I use these affordable converters to convert HDMI signals to SDI on both ends. They can be lifesavers, and I suggest spending a little more on the BiDirectional version. It’s worth it for the convenience alone. Two things about these converters that need to be mentioned:

1. There’s another product on the market that’s considered the professional standard: the Decimator. On top of being a converter, it includes a scaler, and it can also send a black video signal as backup in case technical difficulties arise. It’s a great product, but it comes with a heftier price tag. (Also, always make sure to pack some pliers or a BNC Connector Tool. Removing an SDI cable from a Decimator can be frustratingly difficult.)

2. The converters are now powered via USB-C, which have (admittedly rarely) given me an issue. I swear, the older models that were powered via mini USB were infallible.

It’s better to be safe than sorry, and that’s why it’s a great idea to either purchase or rent a Blackmagic Hyperdeck for your next shoot. Bad things can happen out of nowhere in production. Corrupted hard drives, data failures, sudden encoding software shut-downs. You name it.

The HyperDeck Studio HD Plus (and the step-up Pro and 4k Pro models) is an extremely well made device that can help keep your mind at ease, especially in an age where on-demand recordings are sometimes even more important than the live show experience.

These recorders all have slots for two memory devices (SD cards or SSDs) that, when maxed out, will automatically switch to the second memory device without dropping a frame. When streaming or switching conferences in the field, I like to run the main camera feed into my HyperDeck with the room audio. That way, if something happens to my program feed, I can always get the slide deck from the presenter after the fact and then rebuild their presentation in post.

In closing, make an effort to check out some of these products from your university’s equipment lending program. It’s likely you’ll fall in love with any Blackmagic Design product you get your hands on. There’s no way around the fact that the company puts out stellar gear.

Also, be sure to follow Blackmagic Design on social. Their live release demos, featuring founder Grant Petty, are legendary.